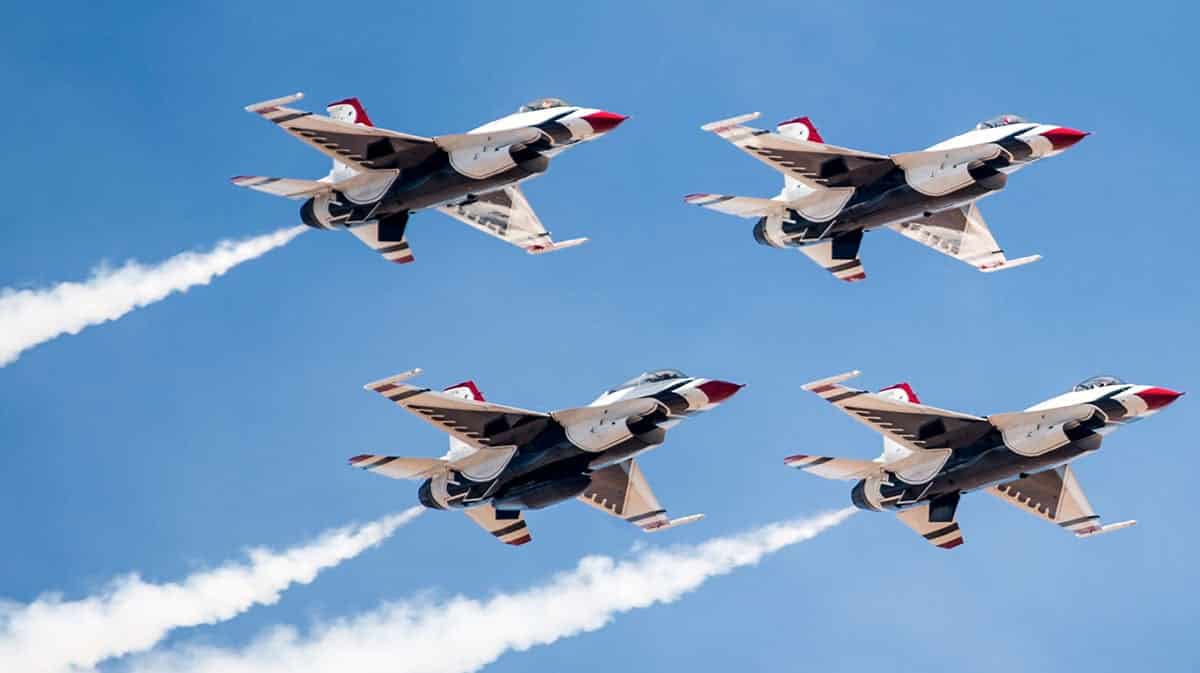 Nellis Air Force Base is the home of a number of key aviation-focused activities and through various contracts, allows companies like ours to offer rewarding DoD jobs to veterans and civilians alike.

Every year, the Air Force base is the host of the Aviation Nation event, both a live airshow featuring the famous Thunderbirds, as well as many static displays showing off all things aviation, from as far back as World War II all the way into the future of aviation technology. This public spectacle returns home to the Las Vegas Valley on November 5th and 6th, for its final shows after several months of traveling the US.

Nellis AFB is the leading Air Force combat training facility in the country, which means unlike many of the other airshow events around the country, the Nevada-based event is able to feature the newest aircraft available that other bases may not yet have access to and gets to show off some of the most sophisticated combat training in the nation, as supported by the team at JT4.

This year’s Aviation Nation event, commonly referred to as America’s Airshow is bound to be one for the books. The base has been in use for over 70 years, and this year marks the 75th Anniversary of the U.S. Air Force as well as 20 years of putting on this show here in Nevada. The Thunderbirds never disappoint, but you can certainly expect them to pull out all the stops this year!

The Teams Behind The Show

As one could imagine, gaining access to what happens behind the scenes is no simple feat. Not just anyone gets to be a part of what goes into making these aviators the best in the world. It requires a high-security clearance that only select people have access to, and a serious work ethic to ensure these warfighters have the best technology and training possible to perform the most dangerous and jaw-dropping stunts and maneuvers.

If you’ve ever wanted to get your foot in the door and work directly with the military to develop and evolve the training that creates the best combat fighters in the nation, look no further than JT4.

Why is This The Best Airshow in The Nation?

The Aviation Nation Airshow at Nellis AFB is regarded as the best in the nation because it is the largest show with not only the most modern technology in the industry, but the most well-trained combat fighters. There are amazing talented aviation experts all over the world, but this base, in particular, has some of the newest and most advanced equipment our military has to offer, which requires special training to operate efficiently and safely.

The Warfare Center is a facility that provides specialized planning, organizing, integrating, and executing warfighting capabilities for U.S. military forces in support of global responsibilities across the range of military operations.

JT4 has the distinct privilege of being able to provide the necessary technology and planning for these and many other training ranges across the west coast. While the majority of our involvement is to ready military aviators for real combat, many of the maneuvers and devices presented at the annual Aviation Nation event are made possible thanks to the detailed training sites and technology supported by our amazing staff of experts in various fields. See how you can become one of them here!

Made Possible by Veterans and Civilians Alike

The staff at JT4 are some of the brightest in their fields, many coming from some of Nevada’s most prestigious schools such as the Howard R. Hughes College of Engineering at UNLV. Our partnership with The United States Air Force and the Department of Defense (DoD) has opened many doors for our team members.

Our staff is made up of incredibly talented people from all ranges and fields, including recent graduates in engineering, electronics technology, and computer science, all the way to seasoned professionals with years of aviation, IT, contracting, cyber security, and/or actual military experience.

DoD jobs for Veterans at JT4 can be a great way for our former military members to transition from military service into a practical civilian role. Since JT4 holds the J-Tech II contract with customers like the Air Force, Navy, and more, we are able to offer our veterans DoD jobs that they are comfortable and knowledgeable in, and give them opportunities to continue working passionately on projects of which they can be proud.

Every year, our staff gets to see that hard work on display at this amazing Las Vegas Air Show! You can expect to see some of our staff and crew enjoying the show this coming November.

If you are interested in attending this FREE public event, you can find all the information you’ll need on Nellis AFB’s website here: https://www.nellis.af.mil/Aviation-Nation/